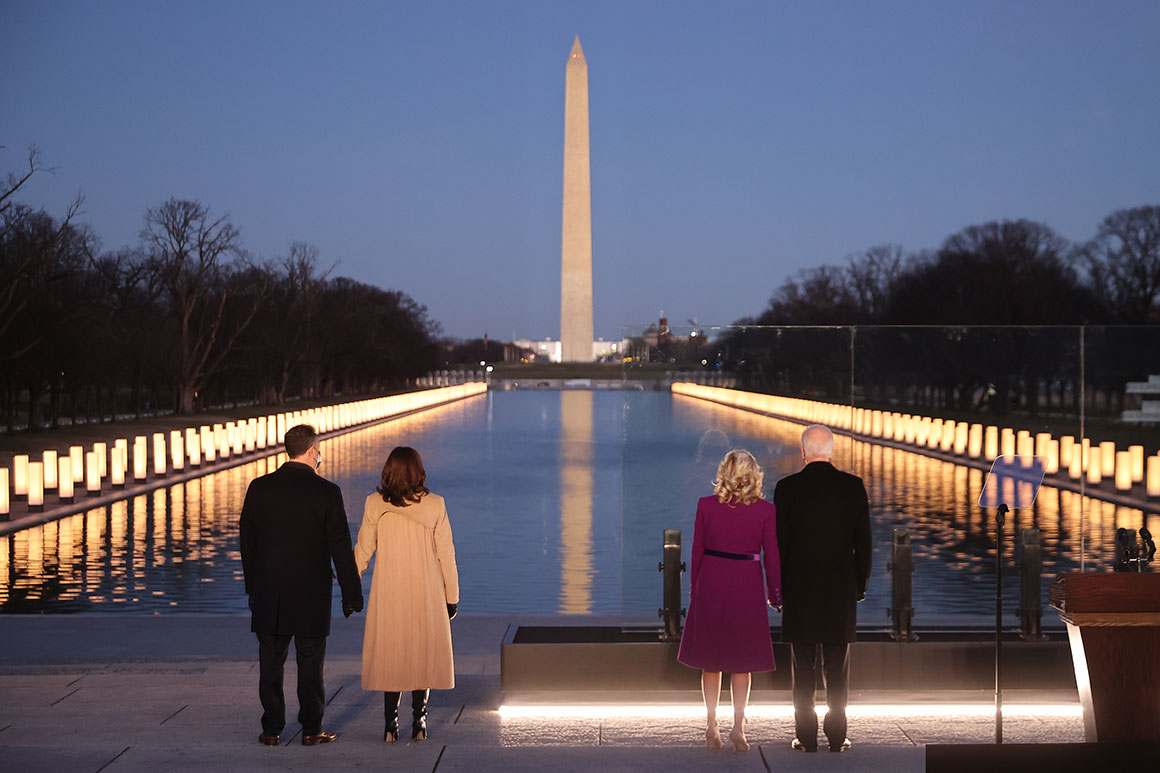 The U.S. surpassed half a million coronavirus deaths on Monday, reinforcing the magnitude of the pandemic even as more Americans get vaccinated and Covid deaths and hospitalizations are declining.

The milestone, based on a tally maintained by Johns Hopkins University, came just over a month after the nation’s death toll passed 400,000 and as public health officials train their sights on new, more contagious coronavirus strains that have been reported in almost every state and threaten to tax already stressed local health systems.

President Joe Biden is due to mark the occasion with a moment of silence and candle-lighting ceremony with Vice President Kamala Harris Monday evening.

Biden, soon after being sworn in, predicted the nation would hit half a million deaths by the end of February while warning his administration would be unable to dramatically increase the pace of vaccinations. The half-million mark, beyond its symbolism, underscores how quickly Biden’s team has come to own the health crisis as tensions build with states over vaccine allocations, school reopenings and basic public health measures like mask mandates.

“It really is a terrible situation that we have been through, and that we’re still going through,” said Anthony Fauci, Biden’s chief medical adviser, during an interview on CNN’s “State of the Union” on Sunday. “And that’s the reason why we keep insisting to continue with the public health measures, because we don’t want this to get much worse than it already is.”

The spread of the virus has ebbed after a dramatic spike over the holidays and new year, with new daily cases falling back to roughly 64,000 per day, compared to the peak of 300,000 new cases in January. Still, the country’s 28.2 million cases and death toll still far outpaces the rest of the world.

Since Biden took office, vaccine allocations to states have increased roughly 50 percent, according to the Biden administration. More than 64.2 million doses have been administered as of Monday, compared to roughly 16 million when Biden entered the White House.

The administration recently finalized a deal to buy 200 million additional doses and the president has committed to having enough shots to vaccinate every American adult by the end of July. There is likely to be additional vaccines available, as more manufacturers bring new shots to market. Johnson & Johnson is expected to receive emergency use authorization from the FDA for it’s one-shot vaccine as soon as this week.

Officials in recent days have also said they will be investing additional funding to scale up surveillance to detect the spread of emerging variants across the country, as well as increase testing capacity, including for schools as part of the administration’s push to reopen in-person learning for students in kindergarten through eighth grade.

Though the Biden administration has taken a more hands-on approach in recommending masking and social distancing, compared to the Trump administration, officials have stopped short of recommending against relaxing state restrictions on dining or gatherings and some experts say more guidance around mitigation measures may be needed — especially as more contagious variants continue popping up across the country.

A number of Biden’s former pandemic advisers from his transition have called on the president to push mask mandates and widely recommend the use of N95 respirators to protect against the variants. The Biden administration has discussed a proposal that was floated under former President Donald Trump to send every American a mask, though it’s unclear if or when that plan will come to fruition.

Some experts, including Fauci, have said Americans may still need to wear face coverings into 2022, depending on how many people get vaccinated and whether the level of community spread falls considerably.

“When it goes way down, and the overwhelming majority of the people in the population are vaccinated, then I would feel comfortable in saying, we need to pull back on the masks, we don’t need to have masks,” Fauci said in the CNN interview.

Biden, during a town hall in Wisconsin last week, predicted a return to normalcy could happen by Christmas, though he expressed caution about variables that could throw off that timeline.

“I think that there’ll be significantly fewer people having to be socially distanced, have to wear masks, et cetera,” Biden said.

He added: “But we don’t know. So I don’t want to over-promise anything here.”