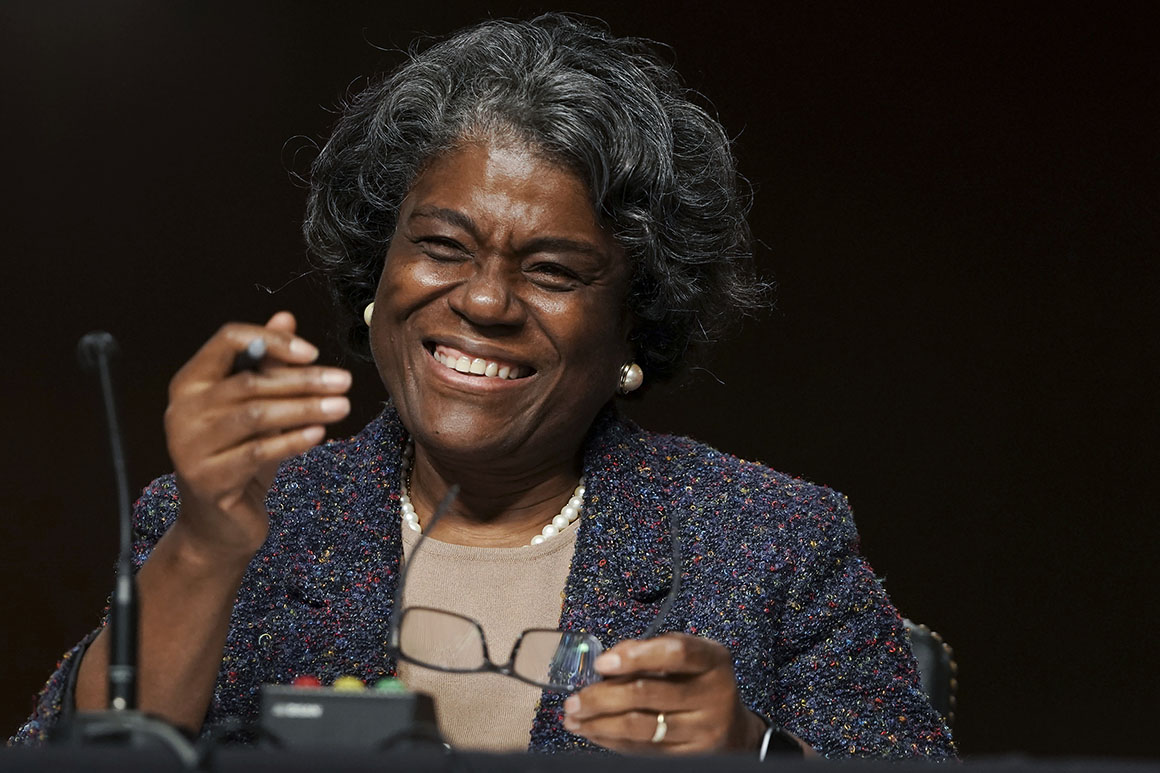 NEW YORK — The Senate voted Tuesday to confirm Linda Thomas-Greenfield as United States ambassador to the United Nations, by a 78-20 vote.

Thomas-Greenfield will arrive at the global body’s New York headquarters surrounded by global problems, including a U.N. funding shortfall to which the U.S. has itself contributed.

From Day 1, Thomas-Greenfield will confront twin crises — climate change and Covid-19 — and a string of conflicts ranging from a 20-year war in Afghanistan to a 10-year civil war in Syria, from a humanitarian crisis in Yemen to the politically fraught Iran nuclear deal.

If that wasn’t enough, Thomas-Greenfield will assume leadership of the U.N. Security Council on March 1 — the global organization’s top decision-making body — before the boxes of her 40th floor apartment overlooking the Hudson River are even unpacked.

Thomas-Greenfield will be sworn-in Wednesday morning by Vice President Kamala Harris, and will arrive in New York Feb. 25 to present her credentials to U.N. Secretary General António Guterres.

U.N. officials told POLITICO they hope to see both a return of American leadership and a back payment of unpaid American U.N. dues under Thomas-Greenfield’s leadership.

President Joe Biden made an initial commitment of $4 billion on Feb. 18 toward global vaccine efforts such as COVAX, and broader health security investments.

After four years of Trump-induced whiplash and withdrawal from key U.N. entities — including the World Health Organization — the sense of relief around Turtle Bay is palpable, even with thinned out attendance and a largely virtual meeting schedule.

“It can only get better,” said an adviser to Guterres who was not authorized to speak to the media. “We’re cautiously optimistic,” they added.

Guterres’s top political priority for 2021 is climate change, and global progress now hinges on the ability of the Biden administration to move beyond its initial gesture of rejoining the Paris climate accord.

The current Security Council leader, U.K. Ambassador Barbara Woodward, told POLITICO the Britain is excited to work with Thomas-Greenfield, “in particular on shared priorities such as climate and Covid-19.” Woodward today succeeded in pushing climate change onto the agenda of the Security Council, in a debate led by Prime Minister Boris Johnson, which also featured the Biden administration’s new climate envoy, John Kerry.

Thomas-Greenfield, a 35-year veteran at the State Department, faced tough questions in her Senate confirmation hearings over the extent to which she will confront Chinese authoritarianism and regional meddling. She promised in her confirmation hearing to promote American values of democracy, human rights, and peace.

Her deep experience across Africa will be necessary, experts and advocates say, to advance U.S. relationships and contain China’s growing influence across the U.N. system.

Those tensions will likely come to a head in debates over equity in Covid vaccine distribution. “We believe Linda Thomas-Greenfield’s background as former Assistant Secretary of State for African Affairs makes her extremely qualified to understand the scale of this crisis and the importance of U.S.-Africa policy,” said Sean Simons, spokesperson for the anti-poverty ONE campaign.

Thomas-Greenfield is the fifth consecutive woman to be confirmed as U.S. Ambassador to the United Nations. Five of the 15 Security Council ambassadors are women.

“A little less testosterone and a little more dialogue, patient listening and a capacity to facilitate – they’re undervalued qualities, particularly when there’s a lot of tension between some of the big players at the table,” Ireland’s ambassador Geraldine Byrne Nason told the Irish Times.