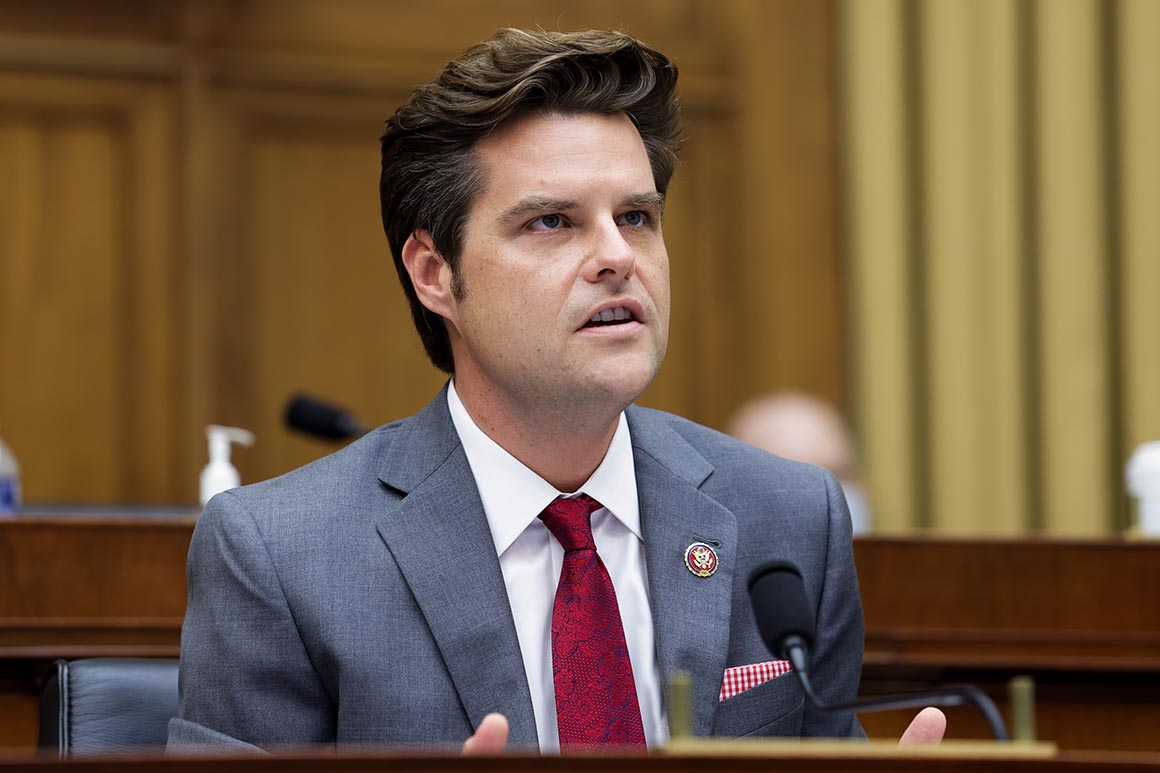 A boutique conservative consultancy group working on behalf of Rep. Matt Gaetz is threatening to sue journalists for their coverage of the embattled congressman.

The entity, Logan Circle Group, is run by Harlan Hill, a former Democrat who became a top Trump surrogate during the 2016 presidential election. The official behind the recent legal threats is Erin Elmore, a colleague of Hill’s at the Washington-based consulting firm and a Season 3 contestant on “The Apprentice.”

Elmore, who has a legal degree from Villanova and has active status as an attorney in Pennsylvania, has emailed at least two reporters who have written on Gaetz, threatening them with lawsuits over their coverage of the Florida Republican. Gaetz is reportedly facing a federal probe into a potential violation of federal sex trafficking laws. But Elmore’s email took umbrage with reports that the congressman had asked then-President Donald Trump for a pardon and was currently on the outs with the 45th president.

“We are seeking an immediate print and on-air statement of retraction. Failure to comply with this request may result in litigation,” Elmore wrote in an email to a POLITICO reporter on Wednesday following the publication of an article describing the reluctance among Trump and his allies to outright defend Gaetz.

The Logan Circle Group declined to discuss its relationship with Gaetz specifically, but a source familiar with the arrangement confirmed they have been working for the Florida congressman. Gaetz’s congressional office did not respond to an inquiry about the group.

“Logan Circle Group is a premier political communications consultancy, and we take the privacy of our clients and colleagues extremely seriously. We represent a number of high profile clients, and we are delighted to support the work of America First candidates, Congressmen, and public figures,” said Elmore in a statement following POLITICO’s inquiry about the firm’s work for Gaetz.

The group’s entrance into the drama surrounding Gaetz underscores how the congressman is trying to fight his way through a potentially career-ending scandal rather than retreat from the political scene entirely. In addition to the legal threats, both Hill and Elmore have amplified tweets in support of Gaetz on Twitter, and Elmore has appeared on Newsmax to discuss and defend Gaetz.

“Everyone in America, whether you like it or not, is proven innocent until guilty,” Elmore said on Newsmax.

Gaetz, a firebrand pro-Trump congressman from Florida’s panhandle, is currently battling for his political future following reports he is under investigation by the Department of Justice for a sexual relationship involving a 17-year-old. Gaetz, who has not been charged, has denied having any sexual relations with underage women and accused federal investigators of distorting relationships in which he paid for the travel expenses of women he dated. In a bizarre twist, the congressman has claimed he and his father are also the target of extortion by a former DOJ official who they say is trying to leverage knowledge of the investigation in order to secure the release of a hostage in Iran.

His legal troubles appeared to grow on Thursday when Joel Greenberg, an associate of Gaetz, appeared likely to cooperate with federal prosecutors in a sex-trafficking criminal case that first led investigators to the Florida congressman. Gaetz and Greenberg maintained a close friendship and were often spotted together at social events until Greenberg was indicted on 33 federal charges, ranging from stalking and identity theft to sex trafficking of a minor and various financial crimes.

“I am sure Matt Gaetz is not feeling very comfortable today,” said Greenberg’s defense attorney, Fritz Scheller, after a court hearing in Florida.

On television and in an op-ed, Gaetz has denied ever paying for sex or having sex with a minor. A former staff member and Air Force member, Retired Air Force Capt. Nathan Nelson, as well as a group of current female staff members — who remained anonymous in a letter of support published Thursday — have defended Gaetz.

But as allegations involving improper behavior have swirled around the congressman, he has found little backing from members of Congress or figures in Trumpworld. Trump finally put out a statement this week that said, “Congressman Matt Gaetz has never asked me for a pardon. It must also be remembered that he has totally denied the accusations against him.”

While it’s unclear how Elmore was first connected to Gaetz, the former “Apprentice” contestant has long been active in Republican political circles. Her resumé includes stints at Turning Point USA, the conservative youth organization run by Trump acolyte Charlie Kirk, campaign trail appearances alongside Ivanka Trump during the 2016 general election and a contributor role at Townhall.com. Elmore currently serves as executive director of a little-known grassroots political organizing group called USA Strong and recently debuted a new web show “Wine About It” where she drinks wine with fellow conservatives as they discuss the latest trends in culture and politics.

“Ladies and gentelman [sic], the GREATEST President of the United States,” she captioned an Instagram photo of her and Trump inside his gilded oceanside resort last month.

At least two of Elmore’s former or current colleagues at the Logan Circle Group also have ties to Trumpworld. In addition to Hill, who served on the former president’s 2020 campaign advisory board, the consultancy recently employed Allan Betz, an advance staffer for Trump’s reelection operation and former U.S. Agency for International Development appointee during his administration.

The group worked with at least four Republican candidates during the 2020 election cycle, according to Federal Election Commission disclosures, including Kris Kobach, who was defeated by Sen. Roger Marshall in the GOP primary for Kansas’ open Senate seat last August, and Ohio congressional candidate Christian Hagan, who lost to incumbent Democratic Rep. Tim Ryan last November.