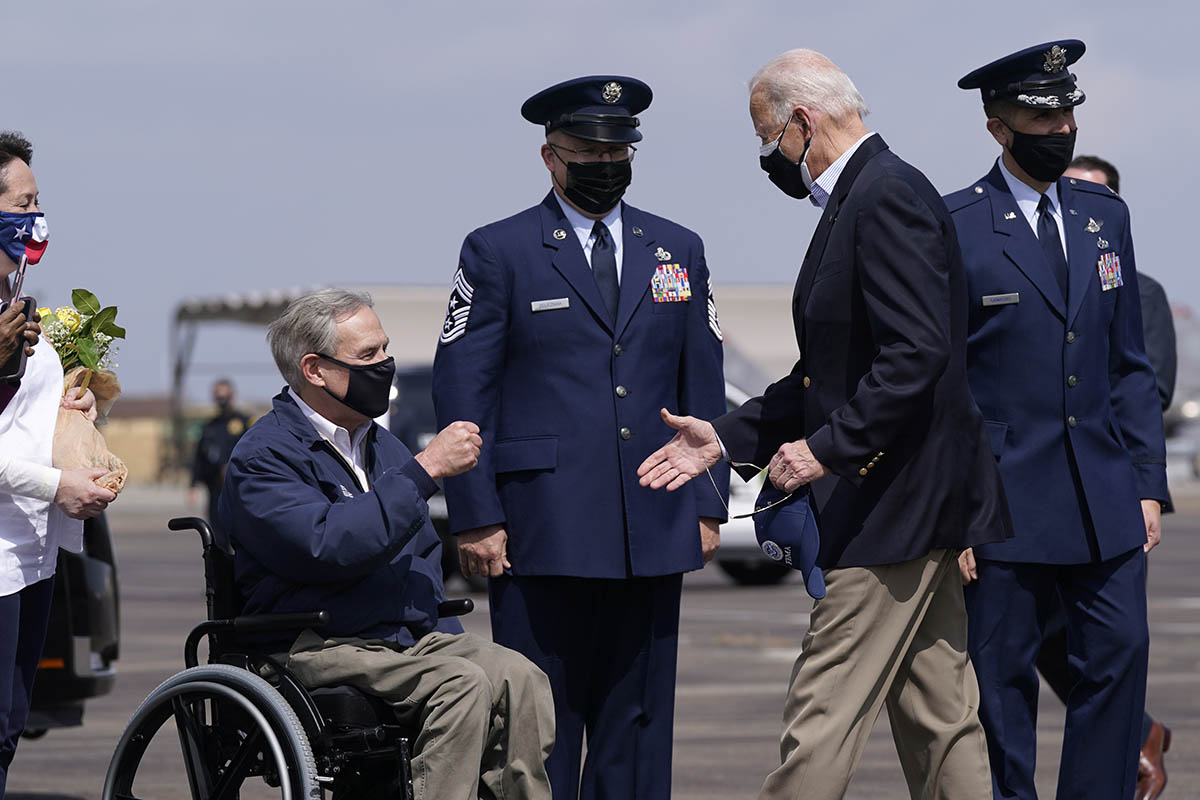 EL PASO, Texas — On Joe Biden’s third day in office, he went through a rite of passage weathered by every modern president: He got sued.

Texas — the nation’s largest Republican-held state — did the honors, hitting the new administration with a lawsuit targeting Biden’s decision to temporarily pause deportations.

But where the state proved to be a well-funded legal foil to President Barack Obama on everything from health care to environmental and labor regulations, Texas Republicans may find it more difficult to score politically against the new administration.

Texas is mounting its offenses earlier and more aggressively than it did against the previous Democratic president — including a new challenge on Tuesday. It’s the same role California and New York played when Donald Trump was president, suing over abortion restrictions, changes to Obamacare and immigration measures. California didn’t let up, filing nine lawsuits against the federal government on Trump’s last day in office.

Yet, Biden’s long years in the public eye, the more moderate tone he hit on the campaign trail opposite liberal stalwarts like Sens. Bernie Sanders (I-Vt.) and Elizabeth Warren (D-Mass.) and the fact that he’s white, have made him less polarizing than Obama.

And while Biden may still prove to be a useful villain for GOP leaders frustrated with policies more liberal than Obama’s, they are also trying to fend off a far-right insurgency as Republicans court more moderate suburban voters.

“There was more grassroots opposition to Obama, the stimulus and Obamacare,” said Republican consultant Brendan Steinhauser, who has worked on campaigns for Sen. John Cornyn and Rep. Dan Crenshaw, both Texas Republicans. Trump activated a different type of Republican voter, he said — one who worries less about pushing conservative economics and more about culture war flash points. 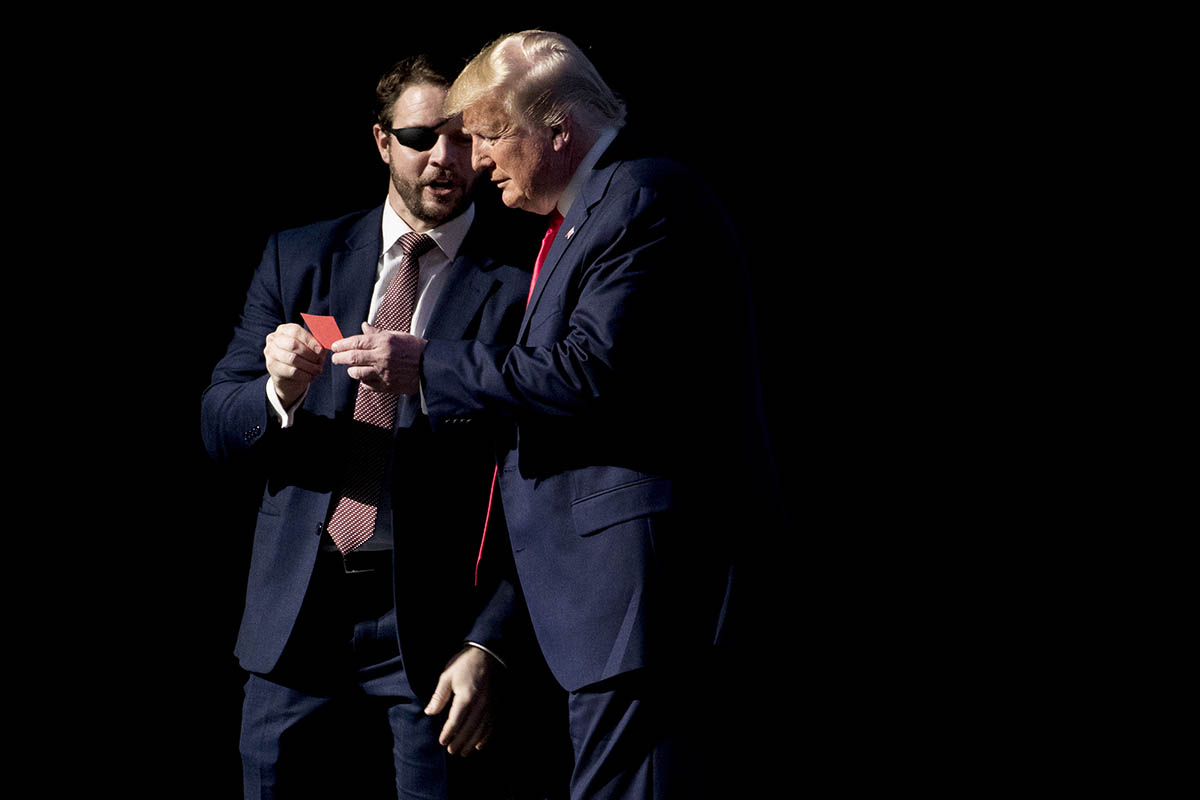 Where Texas Republicans used the legal system a decade ago to deliver a steady stream of red meat to their base, Biden is a far less popular target after losing Texas by less than 6 percentage points in 2020, an unusually close result in the reliably red state.

The coronavirus also has many Texans, long a go-it-alone breed, rethinking the role of the federal government to step in during a crisis. About 48 percent of Texans approved of Biden’s handling of the pandemic, compared with 44 percent for GOP Texas Gov. Greg Abbott, according to March polls from The Texas Politics Project.

Still, Texans’ view of the administration could quickly change if Biden moves to limit guns or loosen abortion restrictions. One thing the fractured GOP base can agree on for now is trying to counter the president’s agenda.

When Biden marked his first 100 days in office, celebrating the reopening of K-8 schools, economic stimulus and vaccination efforts, he had also racked up lawsuits from Texas over the Keystone XL oil pipeline, restrictions on drilling on federal land and a range of immigration issues.

Late last month, Texas filed another suit against the White House over Covid protocols in immigration facilities and joined a multistate suit challenging the administration’s plans to start calculating the social cost of carbon emissions again. A newest lawsuit was launched on Tuesday, challenging restrictions in the latest Covid relief law that bars states from using the money to offset tax cuts. And Abbott and Paxton have blamed the White House for the increase in migrants traveling up to the Southern border. 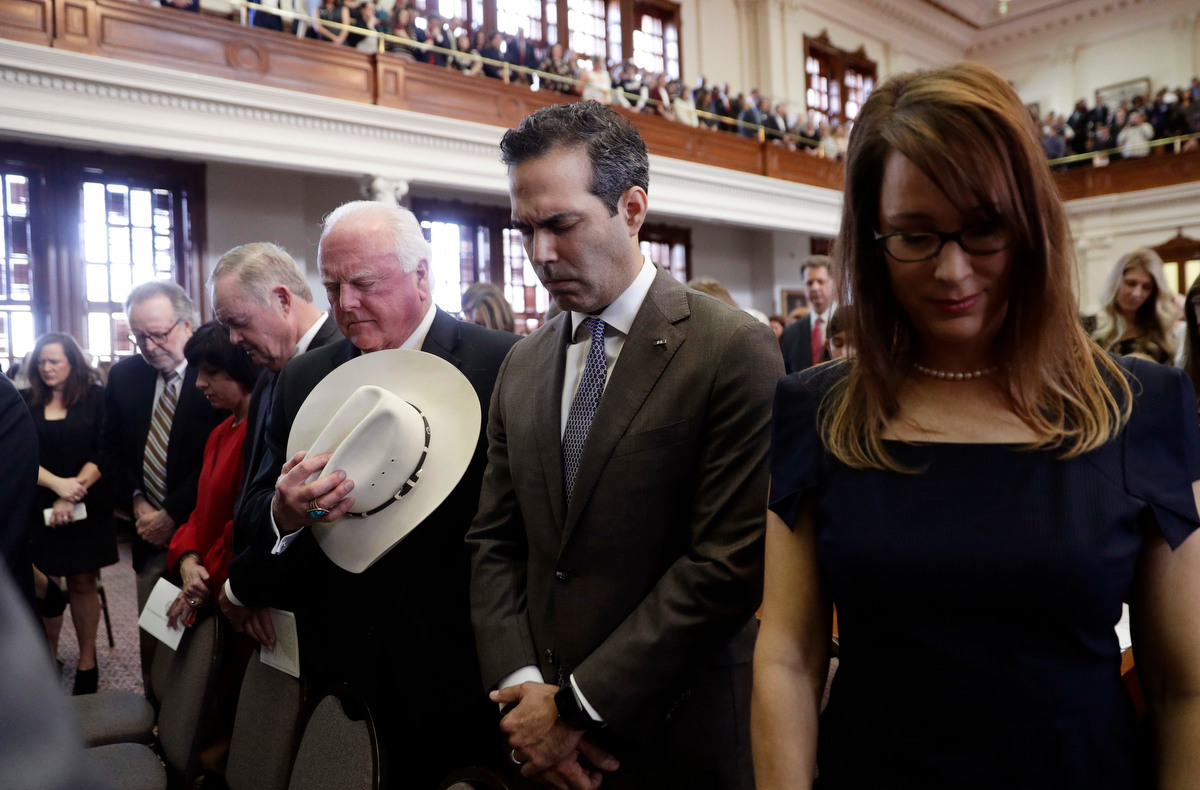 “Regretfully, we’re off to a precarious beginning,” Bush, who is considering a run for Texas attorney general that would pit him against Paxton in the Republican primary next year, said in an interview. “We’re standing up a legal defense task force that’s looking a lot at the same issues that we took on during the Obama days.”

It’s a familiar role for Texas officials who have long bragged about leading lawsuits against the Obama administration. It’s a way to portray themselves as a bulwark against federal overreach even though the suits themselves have a mixed record.

He and other Texas Republicans argue that the lawsuits aren’t about politics, but are being used to counter the Biden administration left-leaning policies.

“We’re not seeing anything out of the current administration that leaves us to believe that they give a flying crud about the state of Texas,” said Texas Republican Rep. Chip Roy, a former aide to Paxton.

Yet, the pandemic has also created a faultline in the Texas Republican Party, chipping away at Abbott’s grip on the state GOP and making space for far-right party leaders who criticized his mask mandates and stay-at-home order. Last summer, former Florida Rep. Allen West was elected chair of the Texas GOP and has since used his perch to chastise traditional business-friendly moderates in the state. Like Republicans elsewhere, his allegiance to Trump has roiled the shrinking share of traditional GOP loyalists eager to move past the former president.

Abbott is well-funded heading into the 2022 governor’s race. But to survive the primary and general election, he will have to thread a path between disparate factions that include Republicans who crossed party lines to vote for Biden — a president whose overall approval in an April poll rivals Abbott’s and who hasn’t had to contend with the litany of racially motivated animus Obama faced.

A divide over health care

The antagonistic relationship between Texas and the federal government goes back to the New Deal, said Brandon Rottinghaus, a University of Houston political science professor who is writing a book about former Texas Gov. Rick Perry. The state, which has no income tax, pulls about a third of its budget from the federal government, a higher share than many other states, he said. That’s partly due to agricultural assistance and federal aid disbursed after natural disasters, but also because Texas has a large share of enrollees in entitlement programs like Medicaid. 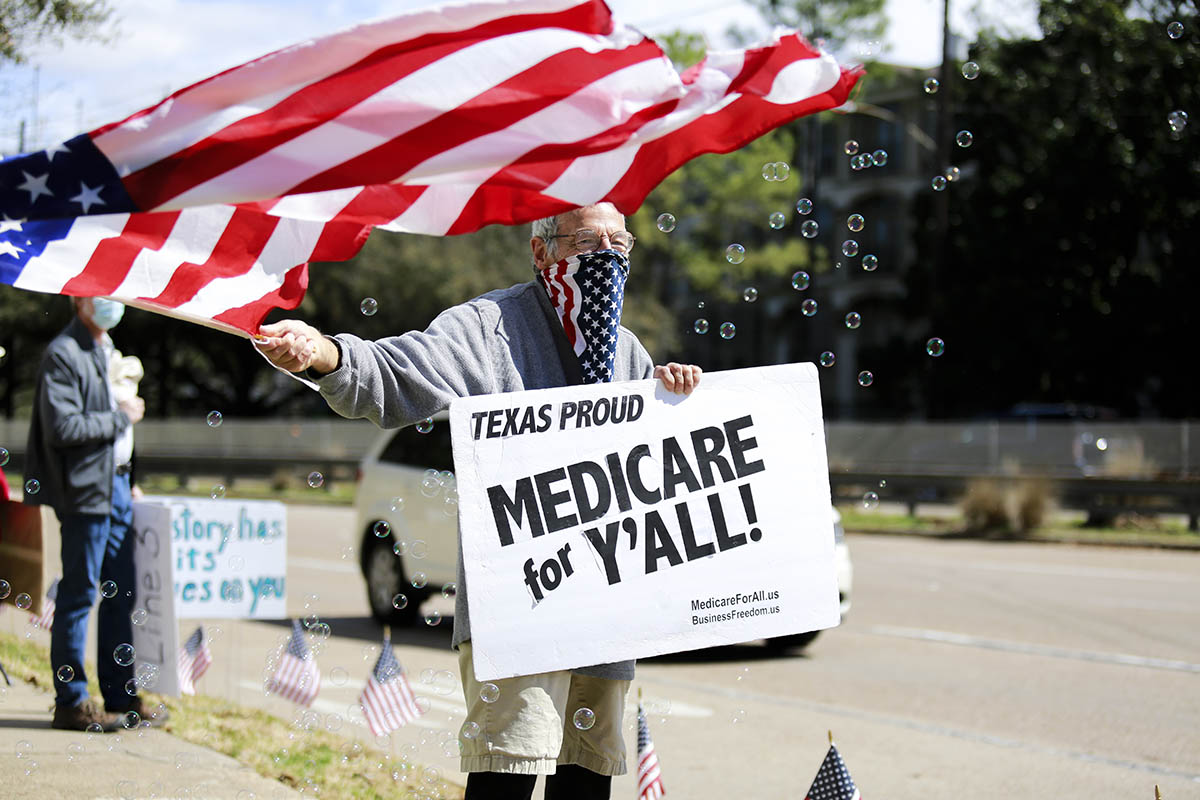 That dependency creates a constant source of tension for Texas Republicans provoking the administration for their political gain, Rottinghaus said.

“Since the early 2000s, the federal government has been a whetstone on which the Texas Republican Party sharpened their political blades,” he said.

The latest flashpoint has again erupted around health care, when the Biden administration revoked the extension of a health waiver that provides billions of federal dollars to Texas counties to help pay for indigent health costs. The move ended an uneasy decade-long truce between the state and Washington.

The waiver was meant to be a temporary salve while states expanded Medicaid, but Texas is one of a dozen states that have resisted expanding health care coverage to low-income residents. The Obama administration extended the waiver even though Texas led largely unsuccessful lawsuits against the Affordable Care Act.

“It wasn’t that we were trying to be generous,” Kathleen Sebelius, secretary of Health and Human Services during the Obama administration, said in an interview. “We were dealing with a state that had no problem at all walking away from health care options. … It was one way to make sure that there was some federal help continuing to go to lower-income folks.”

Sebelius said she’s not sure what the Obama administration could have done differently to prevent the hostile relationship with Texas. She also believes that having a Black president helped fuel a narrative about Obama’s positions being extreme, something that has been harder to pin on Biden. Still, Sebelius said, the futility of trying to work with GOP leaders bent on opposing the Democratic White House at all costs probably isn’t lost on the former vice president.

“There is no question that President Biden was very much aware of steps along the way,” she said about negotiations with Texas about expanding Medicaid.

Biden is still filling key spots at HHS, but she noted that he will likely take a different approach given the history he witnessed. “It’s not a do-over,” she said.

Medicaid expansion is just one of the areas where Texas Republicans have been willing to put politics over financial gain. 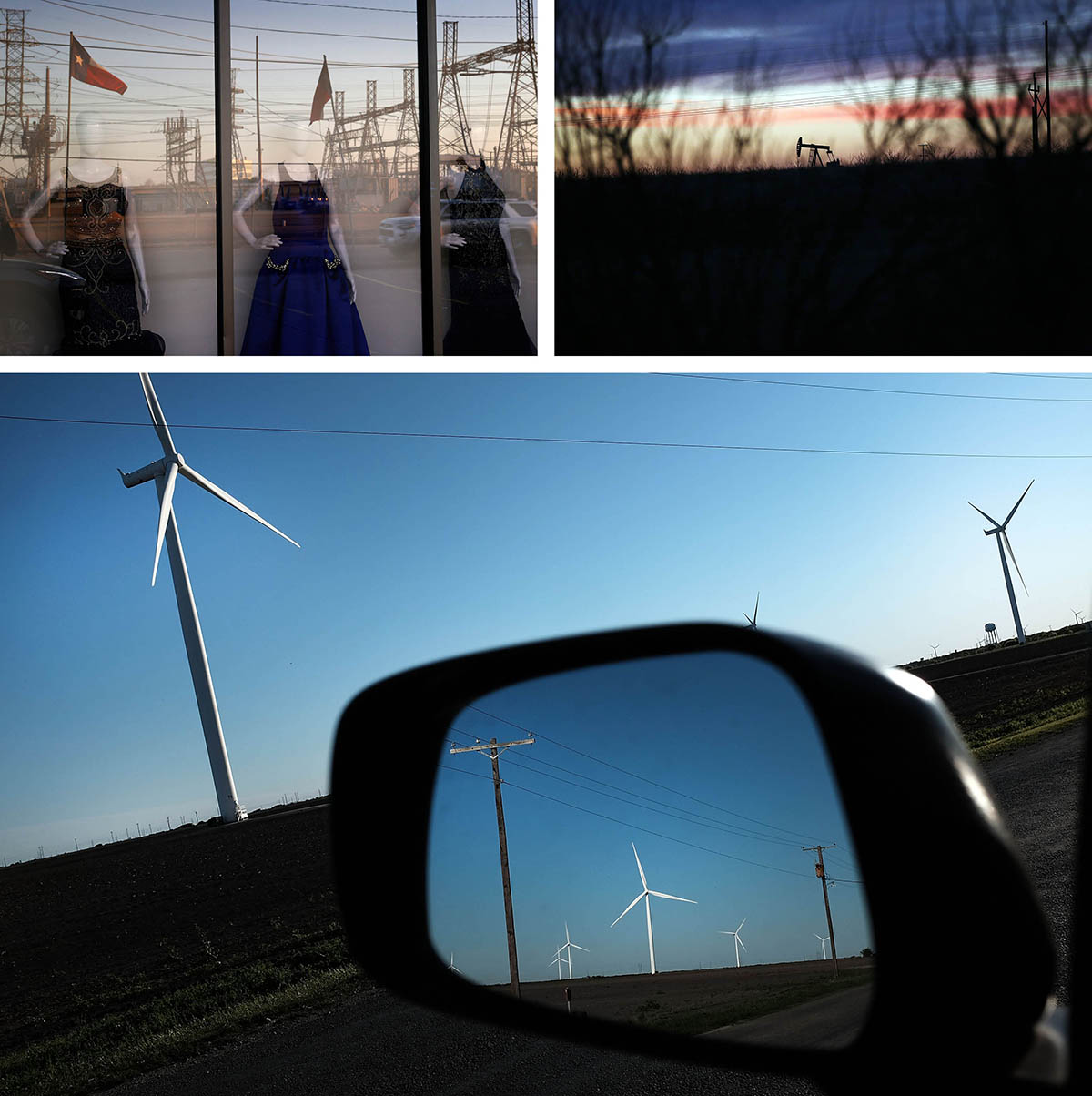 Texas could profit from working with the Biden administration on energy policy, said Michael Webber, chief science and technology officer at ENGIE, a global energy and infrastructure services company, and energy professor at the University of Texas at Austin. The president’s infrastructure proposal, for example, contains billions of dollars to help update the Texas electric grid and to foster renewable energy already prevalent in the state. Even the administration’s move to block the Keystone pipeline will help Texas oil drillers who won’t have to compete with Canadian oil, he pointed out.

“I cannot explain it on economic terms,” Webber said about Texas’s opposition to Biden’s energy policies. Texas is already a leader in wind and solar production, carbon capture and other areas that would benefit from Biden’s proposals. “We know how to produce energy at scale,” he said.

“The only solution that makes sense is political theater,” Webber said. “If you spend years hating Democrats, you don’t stop to think, is that policy good or bad.”