Some women felt encouraged by the growing research that shows the COVID-19 vaccine is safe during pregnancy, while others said they were hesitant to get a shot until there’s more data.

One expectant mother in Midvale hopes receiving the vaccine will help put her mind at ease while out in the community during her final trimester and after giving birth. Another mother in St. George was swayed to sign up for her first dose to protect herself while teaching at school now that people have become more relaxed in wearing masks after the statewide mandate was lifted.

These are some of the more than 40 responses that The Salt Lake Tribune recently heard from women across the state about how they’re deciding whether to receive the COVID-19 vaccine while pregnant.

“This was a painstaking decision for me. I spent several hours a day for weeks learning all I could about this vaccine and its implications in pregnancy,” a 24-year-old woman from Holladay wrote.

Later, when she saw that the Centers for Disease Control and Prevention is now recommending that pregnant people receive the vaccine, “I cried happy tears when I heard the news,” feeling “even more confident and secure” in her decision to get the shot, she said.

Previously, national organizations – including the CDC, the Society of Maternal-Fetal Medicine and the American College of Obstetricians and Gynecologists – said the vaccines should be offered to those expecting or breastfeeding and that it was a personal choice, which people can make with help from their doctors.

When vaccine rollouts began, there was limited data about how the vaccines may affect expectant mothers since early clinical trials specifically did not include pregnant people. But as more research and studies have come out, “we’re getting more and more data that continues to confirm that it’s both safe and effective” for this group, Esplin said.

“We now have tens of thousands of women who have received the vaccine during their pregnancy,” he said, and “we can now say that the risk of pregnancy loss,” among other complications, “was not higher among women who got the vaccine.”

How Utah women are deciding

About two-thirds of the pregnant women who responded to a survey on The Tribune’s website said they have already been vaccinated. The other third said they didn’t feel comfortable yet or had concerns about if the vaccine could harm their baby.

“The vaccine hasn’t been out long enough to know long-term effects,” a 38-year-old mother from Salt Lake City wrote. “I’ve stayed safe from the virus for over a year now, so I’m going to keep doing what I’m doing to stay safe and get the vaccine in 3 months after I have my baby. Just doesn’t seem worth the risk….”

When Dani Al-Mansouri started talking with her doctor about the vaccine back in November, they weren’t sure if she would even be eligible. Over the next few months, they discussed the changing guidelines and weighed the risks and benefits.

“I feel like I’m kind of the anomaly in friends of mine who are also pregnant,” the 21-year-old from Herriman said, adding that she’s seen people post online about their worries about the vaccine.

Meanwhile, Al-Mansouri said she did as much research as she could and relied on advice from medical experts.

“It’s all just a personal choice,” she said, noting the importance of talking with your doctor rather than just discussing with friends or reading what people say on the internet.

On Friday, at 31 weeks pregnant, she went to the Mountain America Exposition Center in Sandy for her second Pfizer dose.

“I just felt like it was the safest thing to do,” Al-Mansouri said. 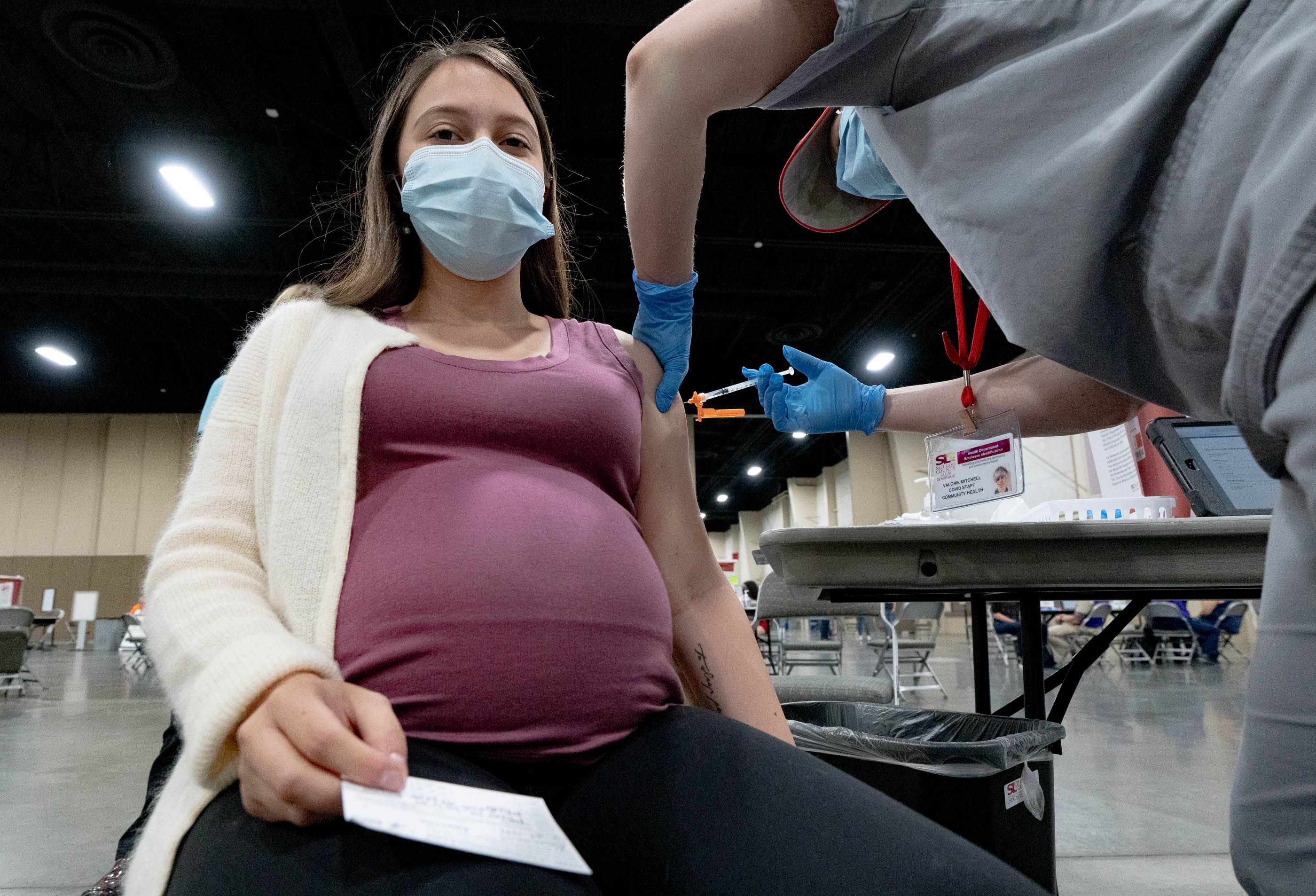 (Francisco Kjolseth | The Salt Lake Tribune) Dani Al-Mansouri, 21, of Herriman, who is 31 weeks pregnant with her first child, gets her second dose of the Pfizer vaccine at the Mountain America Exposition Center in Sandy on Friday, April 30, 2021. (Francisco Kjolseth/)

Dorothy Mayer, who lives in Salt Lake City, said, “it’s been kind of up in the air” with what she’ll choose.

On the one hand, the 21-year-old said she knows that pregnant women are more likely to experience more severe cases if they catch COVID-19 than women who are not pregnant. At the same time, “pregnancy is already difficult,” she said, without worrying that “your teeny, tiny human might not be able to withstand your reaction” to any potential side effects of the vaccine.

For now, Mayer said she finds comfort in the fact that most of the people around her, including her husband, friends and coworkers, have been vaccinated, which should help protect her as she decides.

The CDC’s recent recommendation made Yándary Chatwin feel “100%” more confident in her decision to be vaccinated, she said.

Vaccines are key to society reopening and people getting back out in the world again, she said. Plus, she trusts the science and said she hopes her vaccination will also help protect her future baby.

“I want to make sure I’m doing what’s best for my child,” said Chatwin, 36, who lives in Murray.

Chatwin became eligible for the vaccine before the general population since she works for the Salt Lake City School District. Even though everything known at the time indicated it would be safe, Chatwin said her doctor suggested waiting until the second trimester since most of a fetus’s vital developments occur during the first few months.

When Chatwin was 13 weeks pregnant, she received her first dose of Moderna, followed by a second shot a month later.

Since then, she’s had friends who are expecting, breastfeeding or want to get pregnant ask her about her experience. “So far, so good,” she tells them. 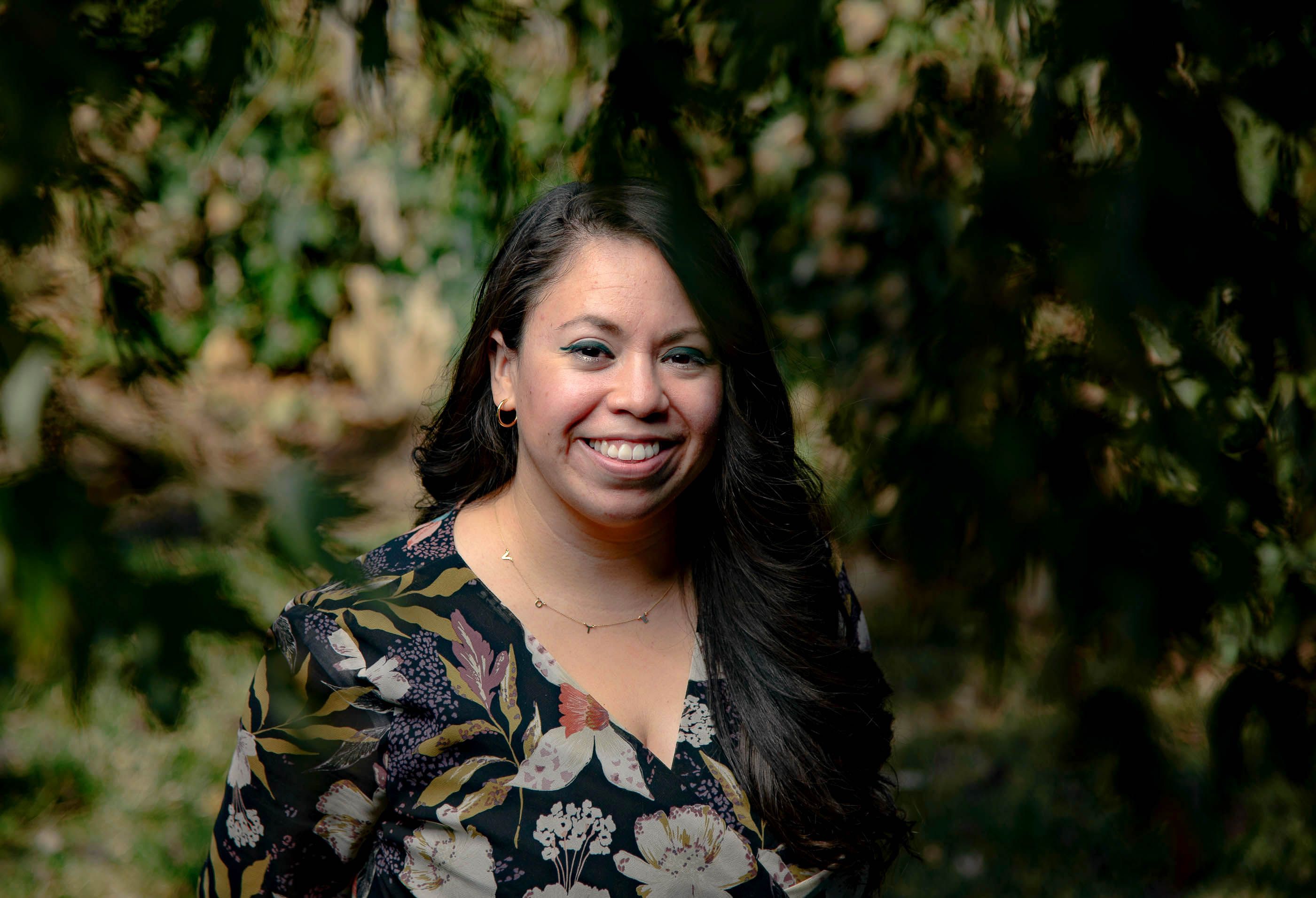 (Francisco Kjolseth | The Salt Lake Tribune) Yándary Chatwin, pictured in 2020, decided to receive her first dose of the COVID-19 vaccine when she was 13 weeks pregnant. The Centers for Disease Control and Prevention is now recommending that pregnant people receive the vaccine, which Chatwin said made her feel more confident in her decision. (Francisco Kjolseth/)

What the latest studies show

Pregnant people experience similar side effects to the vaccine as women who are not pregnant, according to a new study published April 21 in the New England Journal of Medicine. And there were “no safety concerns” observed for people vaccinated in the third trimester or their babies, CDC Director Rochelle Walensky said, while citing the study at the White House coronavirus briefing April 23.

Researchers used data from the CDC’s V-safe After Vaccination Health Checker, the V-Safe Pregnancy Registry and Vaccine Adverse Event Reporting System in the study. They evaluated more than 35,000 pregnant people who were vaccinated between December and February and followed over 3,900 pregnant women in more detail, more than 800 of whom completed their pregnancies.

A study published March 25 in the American Journal of Obstetrics and Gynecology found that the vaccines are generating an immune response in pregnant women, “just like they do in nonpregnant patients,” Esplin said.

“That immune response is actually bigger following the vaccine than it is following natural infection with COVID,” he said, and “those antibodies can cross the placenta and cross in breast milk to get to the baby.”

This study included 131 reproductive-age vaccine recipients – 84 pregnant, 31 lactating and 16 who were not pregnant, the report shows.

With the flu, pertussis and other conditions, “antibodies that transfer from the mother to the baby, either across the umbilical cord or through breast milk, actually provide protection to the baby,” Esplin said. There’s not enough data yet to say if that’s the same with COVID.

“I think that as time goes forward and as we get more and more information about the vaccine, we’re going to find that the data continue to support the idea that this is the safe and right thing to do,” he said.

Becky Jacobs is a Report for America corps member and writes about the status of women in Utah for The Salt Lake Tribune. Your donation to match our RFA grant helps keep her writing stories like this one; please consider making a tax-deductible gift of any amount today by clicking here.