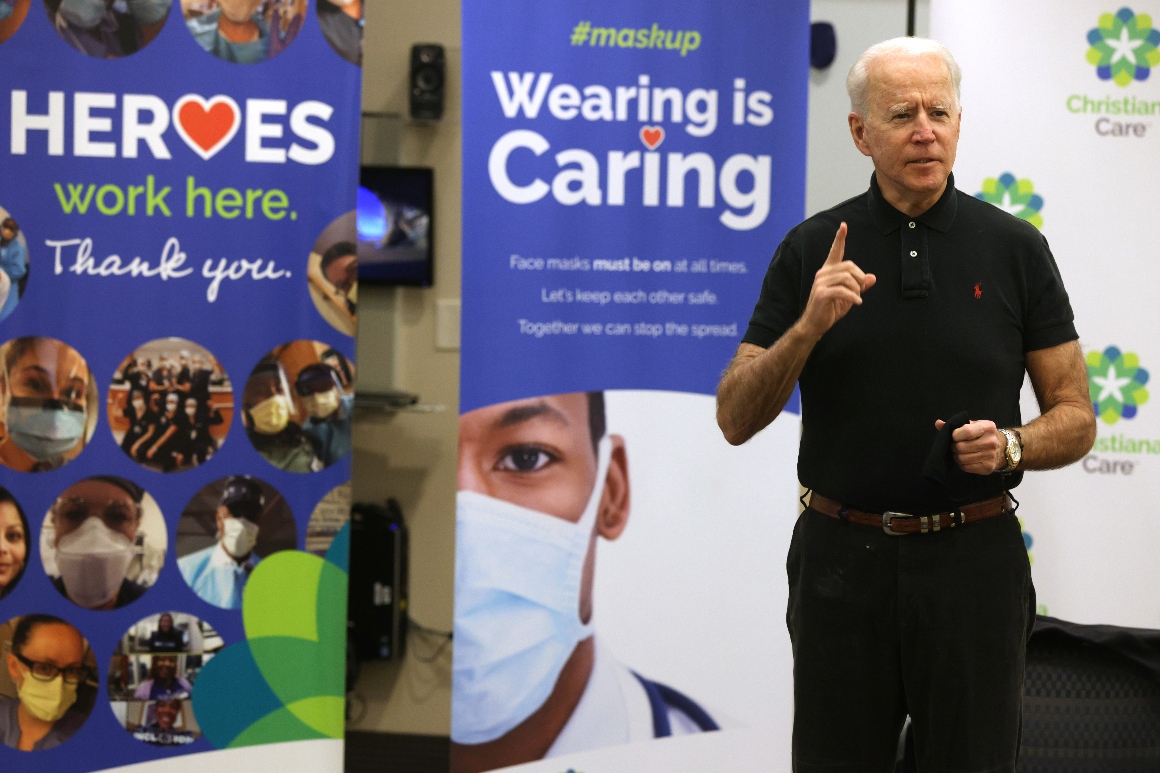 President-elect Joe Biden on Thursday night will sharply break with the Trump administration on fighting the coronavirus pandemic with a plan for a robust federal role in everything from testing to vaccine delivery.

In a speech in Wilmington, Del., Biden will call on Congress to swiftly pass a nearly $2 trillion relief package soon after he takes office, with significant sums directed at expanding testing, accelerating vaccine deployment and safely reopening schools. It would also include $1,400-per-person checks to working families, extended unemployment insurance and housing and nutrition aid.

“He knows his legacy is linked to this,” said one person close to Biden. “It’s both an albatross and an extraordinary opportunity.”

Biden’s plan comes with the pandemic raging and with new strains of the virus threatening to swamp the health system. His central message is the federal government is finally ready to meet the moment after months when the Trump administration left financially struggling states alone to determine how to get the supplies and medical staff they needed to fight the virus.

Across a planned two-day rollout of his pandemic strategy, Biden will also propose creating a federal public health corps of 100,000 people and deploying them to states to staff vaccination sites, bolster contact tracing and launch new programs to better reach rural communities.

Biden’s team says they’ve been consulting for weeks with lawmakers in both parties and are pushing for bipartisan support for the plan. But as they anticipate pushback from GOP lawmakers on the size and scope of the legislation, their strategy involves taking their case for urgent action directly to the public and bringing pressure on Congress to support it.

“This is a national emergency and we need to treat it like one,” a senior Biden administration official told reporters Thursday, previewing the message. “Delay means more illness, more death and more social and economic harm and duress.”

The plan will essentially federalize the current patchwork pandemic response, including spending $20 billion to speed up vaccinations.

The incoming administration envisions setting up vaccination sites in schools, libraries, churches and community centers across the country, a move that public health experts and civil rights groups have been pleading for after a sluggish and uneven initial rollout of the shots.

“If this is not done, it will be a colossal trainwreck and failure,” warned Marc Morial, the president of the National Urban League. “Lots of communities of color don’t have hospitals. Lots of communities of color don’t have pharmacies. If you pour the vaccine distribution into an already discriminatory system, you’re going to compound the issue. And It is undignified to place people in a situation where they have to stand in long lines.”

Biden is also calling for $50 billion to boost testing nationwide, some of which will go to mass-purchasing rapid antigen tests that the transition team sees as a key tool in reopening schools while preventing outbreaks from spreading. Biden’s plan includes legislation crafted by close Biden ally Sen. Chris Coons (D-Del.) that has won the backing of key conservatives like Sen. Lindsey Graham (R-S.C.) that would create a federal corps of pandemic response workers who could assist states on everything from vaccinations to tutoring children who fell behind during months of remote learning.

Still, much of Biden’s call to action will have to run through a sharply polarized Congress where Democrats will have only slim majorities. And, following the attack on the Capitol last week and on the eve of another impeachment trial, tensions and distrust between the parties remain intense.

Despite the mounting health crisis and Biden’s overriding goal of crafting a bipartisan response, Democrats are bracing for his team to hit immediate resistance.

One senior Senate Democratic aide said while cobbling together 60 votes for the package isn’t “outside the realm of possibility,” Democrats “won’t have a ton of patience for political games” and are preparing now to use the budget reconciliation process to pass the bill with only Democratic votes if necessary.

“I think a lot of Democrats have etched in their brain the ‘Lucy and the football’ incident we had with the Affordable Care Act,” the aide said, referencing the months Democrats spent fruitlessly trying to win GOP votes for the bill in 2010.

More recently, it took Congress the better part of eight months to agree on December’s Covid aid bill amid a deepening pandemic and economic recession — and even then, the $900 billion package fell far short of what public health experts say is needed to beat back the virus.

Less than a month later, Biden is now asking lawmakers to go even bigger — and pinning much of his plans on the belief they’ll quickly follow through.

In recent weeks, Biden allies and health experts have voiced worries that the president-elect’s initial vows to administer 100 million vaccinations and reopen the majority of schools will prove too ambitious — denting his credibility and frustrating an already crisis-fatigued public.

Some transition advisers have argued for trying to temper expectations, according to a person familiar with the discussions, especially in the wake of a vaccine rollout that missed Trump administration officials’ initial prediction they’d vaccinate 20 million people by the end of December. The U.S. hit 900,000 daily vaccinations for the just first time on Wednesday, a ramp-up the Biden team will need to further escalate to hit the million-a-day pace Biden needs to make good on his vow.

On a call with reporters on Thursday, Biden transition officials stressed just how difficult the path forward will be and how much the Trump administration’s missteps have set them back.

“What we’re inheriting from the Trump administration is much worse than we could have imagined,” one incoming official said. “More than 10 months later, they still don’t have the basics down. There are not enough tests. Frontline workers are still reusing N95 masks and other PPE. States are scrambling because there was no plan to get needles in arms and there’s been very little coordination. We’re going to do just the opposite.”